The involvement of inflammatory mechanisms may one day help us to identify biological subtypes of mood disorders and so tailor treatment more effectively to individual needs. However, the biology is likely to be highly complex. While the treatment of mood disorders with agents that can broadly be described as anti-inflammatory has shown some preliminary evidence of effect, a high degree of caution is warranted moving forward.

Mood disorders contribute greatly to the global burden of disease, as measured by years lost to premature mortality and disability: in 2017, unipolar depressive disorders and bipolar affective disorder were both among the top ten conditions responsible for overall disease burden.1 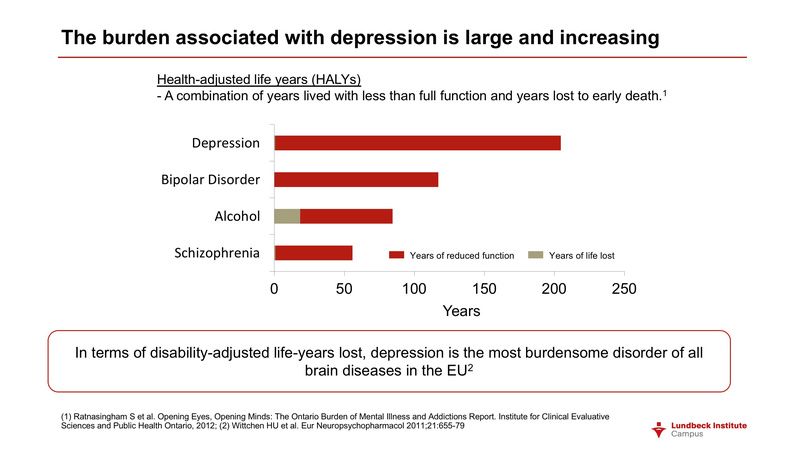 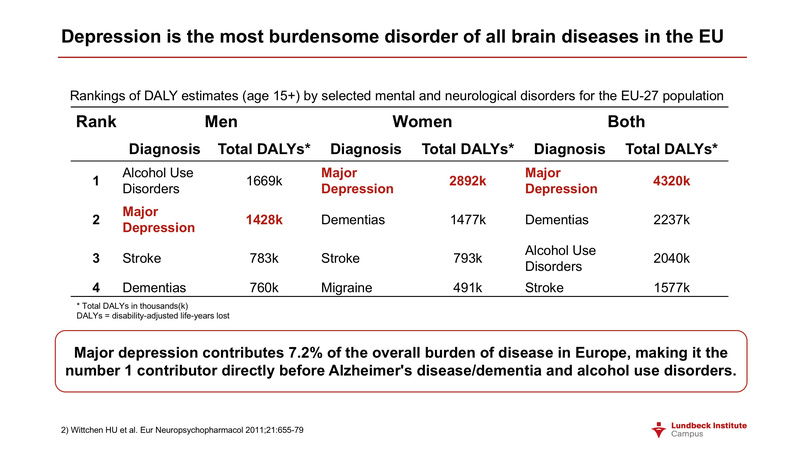 The DALY is a health gap measure for burden of disease, capturing both years of life lost due to premature mortality and years of life lost due to living with disability. Overall, the burden of disease in mental and other disorders of the brain is mainly due to disability, i.e., these disorders impact on the daily functioning of people, rather than leading to premature mortality compared to cancer or cardiovascular disorders.

The three most important contributors to burden of disease are depression (7.2% of the overall burden of disease in Europe), Alzheimer's disease/dementia (3.7%) and alcohol use disorders (3.4%). There are clear gender differences: women were disproportionally affected by depression (one in 10 healthy years of life lost is due to this disorder, or 10.3% of all the DALYs), while for men alcohol use disorders are the biggest relative contributor to the disease burden in Europe (5.3% of all the DALYs). 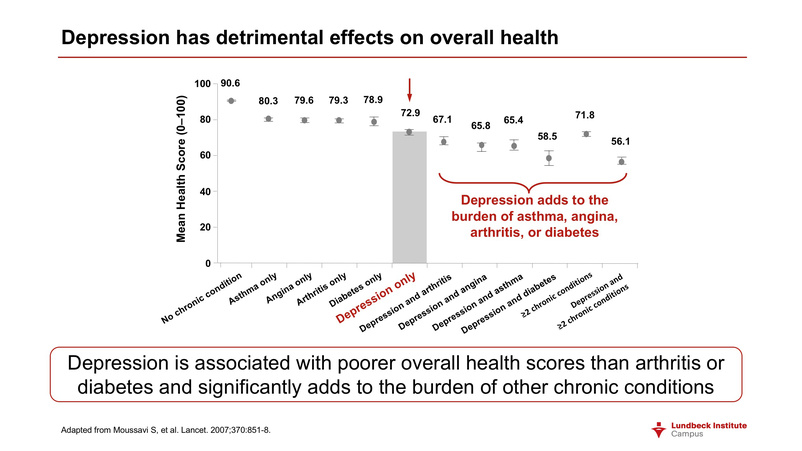 1 / 8
Depression is associated with significant personal and societal consequences 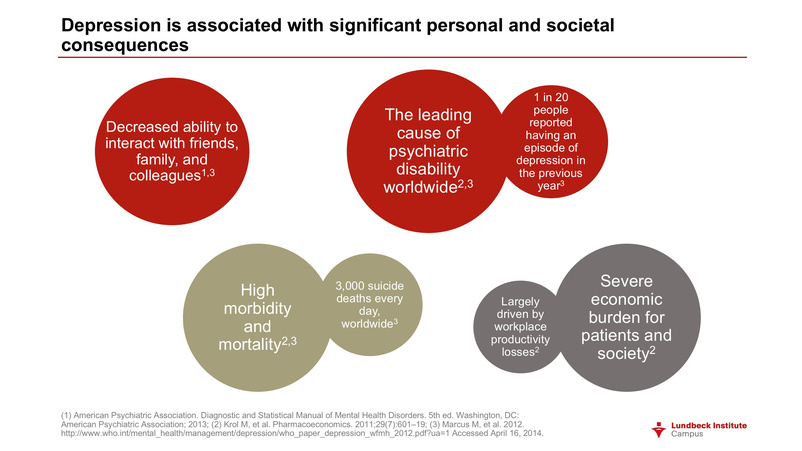 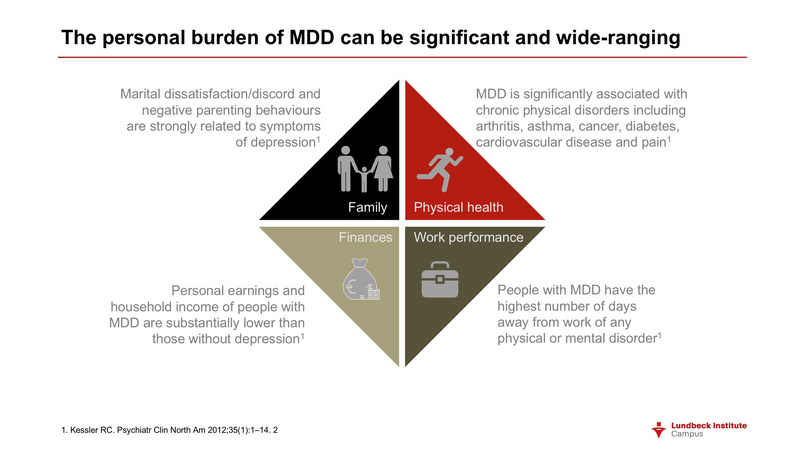 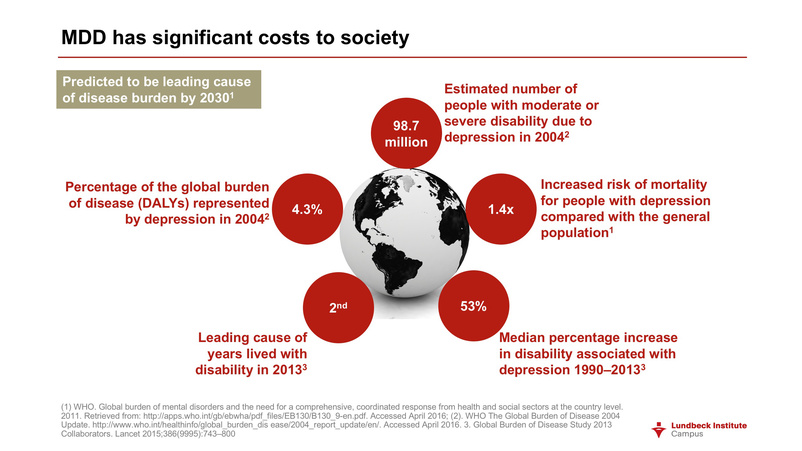 This slide illustrates the global social burden of MDD. The data is based on a systematic review of epidemiological data by Ferrari et al 2013. For this; data was pooled using a Bayesian meta-regression. These weights were used to calculate years lived with disability (YLDs) and disability adjusted life years (DALYs). Separate DALYs were estimated for suicide and ischemic heart disease attributable to depressive disorders. 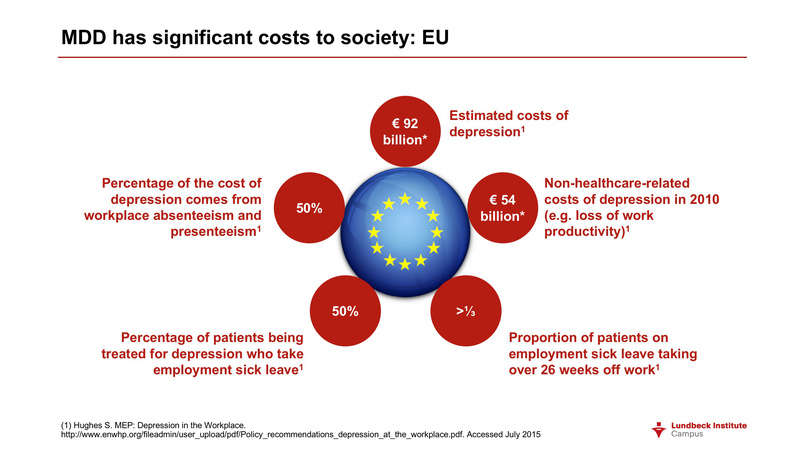 This slide illustrates European burden of MDD with a focus on costs inferred due to impact on work.

Note that:
Absenteeism = lost days of work
Presenteeism = low performance while at work, which is transformed into lost day equivalents 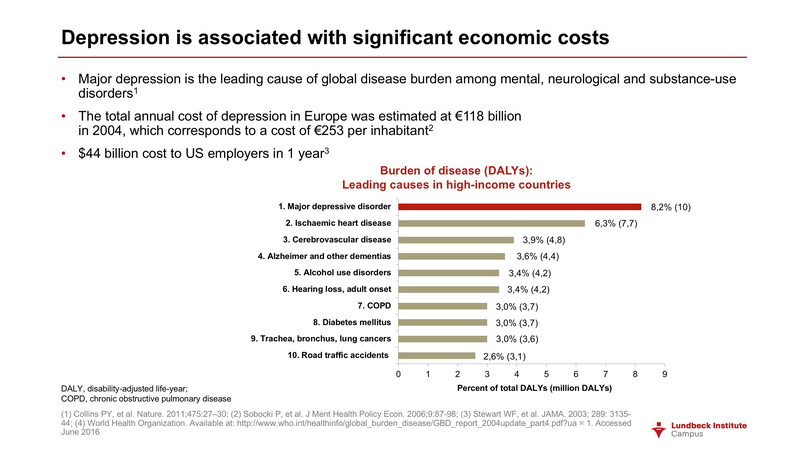 View and download these and other slides on the Epidemiology and Burden of Major Depressive Disorder here.

Treatment options encompass a range of non-pharmacological and pharmacological therapies. In a major recent systematic review and meta-analysis, Andrea Cipriani et al reinforced the view that anti-depressant drugs are effective in major depressive disorder (MDD) when compared to placebo.2 However, many patients do not respond, or respond only partially. If we define adequate clinical response as a 50% or greater decrease on an established rating scale, around half of patients with MDD do not achieve an adequate response3,4 ; and many of those who do experience benefit subsequently relapse.

A recent review has emphasized the importance of urgent intervention in MDD, treatment aimed at full functional recovery, a patient-centered approach to setting goals, use of interventions tailored to the circumstances of the individual, and systematic monitoring of efficacy.4 It is estimated that MDD is treatment-resistant – in that it has not responded to two lines of therapy involving either a switch in agent or adjunctive therapy – in around a third of patients.5

Categorizing MDD as a single entity does not fit with the reality of diagnosis, clinical experience, or – probably – underlying biology

Depression is heterogeneous, and in fact many different disorders. In treatment, antidepressants are often effective. But there are patients who are resistant, and as a group need extra help.

Moreover, the idea that MDD is a single entity does not align with our clinical experience of disease heterogeneity. Nor does it conform with growing hints from biology which suggest diverse causal mechanisms.

1 / 1
Depression is a clinically heterogeneous disorder 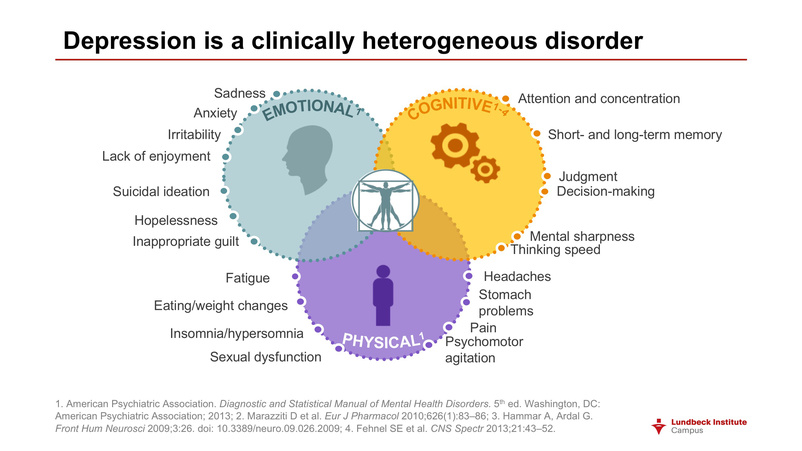 View and download this and other slides on the Definitions and Diagnosis of Major Depressive Disorder here.

Akil et al  emphasize the need for biomarkers that may help us tailor therapy to individual circumstances and better understand reasons for treatment response and resistance.8 They have recently reported progress – aided by animal models, functional imaging studies, and postmortem examination of the human brain – in identifying specific abnormalities of neural circuitry that may underlie different forms of depression. Dysfunctional corticolimbic circuitry in the forebrain is implicated.8 There is also ongoing work to reveal associated changes in gene expression, particularly those related to the stress response.

Such an approach is entirely consistent with that of Thomas Insel who in 2013 suggested that improving outcome in depression will require the bringing together of “genetic, imaging, physiologic and cognitive data to see how all the data – not just the symptoms – cluster, and how these clusters relate to treatment response.”9 Dr. Insel’s Research Domains – based on systems mediating negative valence, positive valence, cognition, social processes, and modulation of arousal – are proposed as a means of aligning symptomatology with biology across conventional diagnostic categories.

It is in essence a call for psychiatry to emulate oncology’s efforts towards precision medicine. Even within a specific tumor type, segmentation of cancer patients into those with specific molecular mutations has been the key to developing the targeted therapies that have brought major advances in disease-free and overall survival.

The remainder of this paper considers one specific potentially causal mechanism – inflammation – that has attracted considerable recent interest as a factor that may underlie the development and maintenance of mood disorders in at least some of our patients.

Among others, the work of Professor Ed Bullmore (University of Cambridge, UK) and colleagues has focused attention on inflammation as a risk factor for depression. Most recently, he and coworkers assayed levels of C-reactive protein (CRP) in the peripheral blood of 102 people with MDD who were treatment-resistant and currently experiencing depression, 48 patients with MDD who were treatment-responsive with no current depression, 48 depressed people receiving no antidepressant medication, and 54 healthy controls.10 Levels were corrected for body mass index.

There were no statistically significant differences from controls in treatment-responsive and untreated MDD groups. CRP level also appeared to be associated with clinical phenotype – notably the presence of vegetative symptoms of depression and state anxiety – and with etiology, in this case childhood adversity.

Such findings reveal an association between depression and a major marker of inflammation. They do not establish causation. However, a number of plausible mechanisms might underlie a causal link. These include the effects of chronically elevated stress hormones such as cortisol, the creation of neurotoxic molecules, and disruption of neurotransmitter metabolism.11,12

One problem in investigating a potentially causal connection has been the difficulty in establishing chronic exposure to stress hormones among people in whom the development of MDD has been a long-term process. Herane Vives et al have addressed this problem by looking at cortisol concentration in hair.11  In a review of studies that used this promising technique, they found replicable increases in hair cortisol associated with stressful life events. More importantly in the context of this paper, they also found some evidence of chronically raised cortisol levels in the hair of people with MDD, compatible with an etiological role for hypercortisolemia.

In an earlier review, Licinio and Wong12 argue in support of a role for inflammatory processes that they say are compatible with the waxing and waning course of depression, and that would account for the association between depression and comorbidities such as ischemic heart disease. More specifically, Licinio and Wong argue for the role of interleukin-1beta and IL-1 receptor antagonist in the biology of major depression, and also – potentially – in the effects of antidepressant treatment.

That said, proponents of the idea of a causal relationship point out that evidence is inconsistent across studies and that much of it is retrospective. In an attempt to cast further light on the connection, Bullmore et al recently undertook a prospective study involving the English Longitudinal Study of Aging.13

Results showed that repeated exposure to systemic inflammation (as indicated by number of occasions with C-reactive protein ⩾3 mg l-1) was associated with the development of depressive symptoms among women. When compared with women who had experienced no episodes of inflammation, those with two episodes were more than twice as likely to develop depressive symptoms. However, there was no such association among men; and the authors acknowledge the need for their finding among women to be replicated.

It must also be noted that peripheral markers of inflammation may bear little relationship to what is happening in the brain. However, evidence of clinical benefit from the use of anti-inflammatory agents would greatly strengthen the case for the causal role of inflammation – whether central or peripheral.

In a systematic review of studies published prior to 2014, Köhler et al identified fourteen RCTs (involving more than six thousand subjects) which had investigated the efficacy of anti-inflammatory agents in patients with depression or depressive symptoms.14 In ten trials, the agents used were nonsteroidal anti-inflammatory drugs (NSAIDs) and in four trials cytokine inhibitors.

Overall, active treatment was more effective than placebo both in patients with depression and in those with depressive symptoms. Sub-analysis suggested the potential antidepressant value, in particular, of a cyclo-oxygenase 2 inhibitor. However, the authors caution that the RCTs included in the systematic review overall had a high-risk of bias “owing to potentially compromised internal validity”.

Husain and colleagues also recently carried out a meta-analysis, this time including studies of bipolar as well as unipolar depression.15  Compared with controls (who received placebo or treatment as usual), patients receiving anti-inflammatory treatment (using agents with different mechanisms of action) had significantly lower post-treatment depression scores.

Active intervention was also significantly more effective than control in reducing post-treatment scores for manic symptoms. But anti-inflammatory treatment did not achieve significantly greater reduction in symptom scores from baseline to post-treatment assessment. And the authors concluded that routine anti-inflammatory treatment for mood disorders could not be routinely recommended until further high-quality studies had shown a positive effect.

The case for the relevance of inflammatory mediators would also be strengthened by evidence that inflammatory markers might predict response or resistance to antidepressant treatment in general. 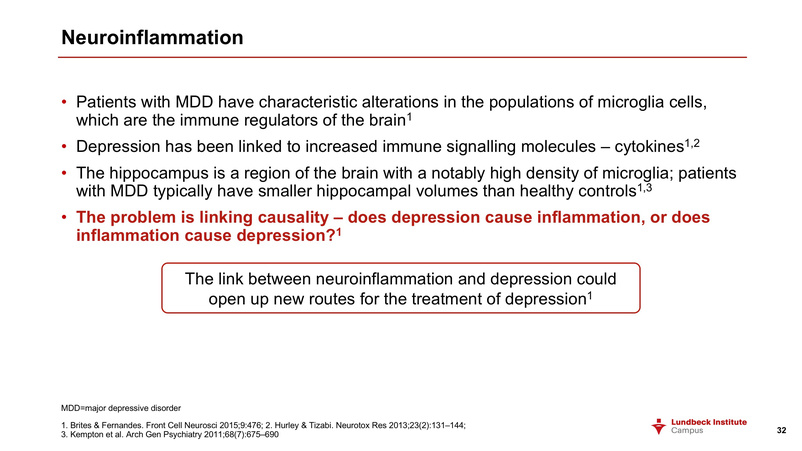 View and download this and other slides on the Neurobiology and aetiology of Major Depressive Disorder here.

In a meta-analysis, Strawbridge et al included data from 35 studies that allowed clinical response to antidepressant treatment to be related to levels of the inflammatory markers IL-6, TNFα and CRP.16 Regardless of clinical outcome, levels of IL-6 decreased with treatment.

In addition to the evidence cited above suggesting a relationship between inflammatory markers and treatment response and resistance, Leighton et al argue that the association between inflammatory diseases and depression makes some element of common etiology plausible, that data from preclinical studies provide evidence that chemokines are linked with peripheral-central crosstalk, and that chemokine-related dysfunction of the hypothalamic–pituitary–adrenal axis and of neurotransmitters may be involved in pathogenesis of the disease.17

If future work clearly establishes that people with depression can be classified according to their profile of inflammatory markers such as chemokines, and that such profiles have implications for the success or otherwise of different forms of therapy, this will mark a major advance.

Such a possibility would be particularly valuable if a specific inflammatory profile could be used to increase understanding of treatment-resistant disease. However, for the present, data indicating an association between inflammation on the one hand and depression etiology and outcome on the other should be considered more as hypothesis-generating than as a guide to management.

We thank Professor Allan Young for sharing his expertise around inflammation in mood disorders and for providing feedback in the development of this article. 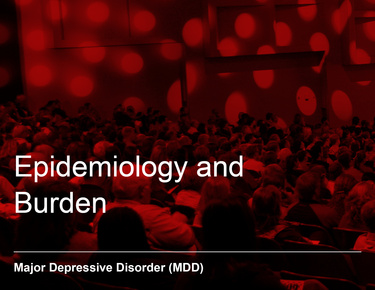 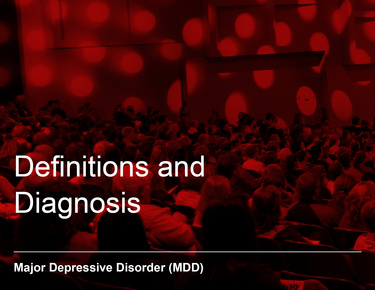 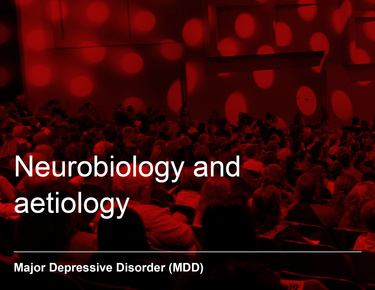