When “Patients” are not “Patients” (Yet), Part 2: Early Detection in Psychiatry

Psychiatric diagnosis currently relies on subjective clusters of symptoms rather than objective brain-based measures.1 One promising way to improve psychiatric treatment is by identifying biological markers of mental illness that could be detected in early stages of the disease process or even prior to the onset of clinically significant symptoms. Biomarkers are especially needed in psychotic disorders, given that a clear majority (80–90%) of patients with schizophrenia experience a preclinical or prodromal phase—or period of decreased functioning—preceding the onset of full psychotic symptoms.2 By gaining a better understanding of risk factors and biological markers associated with early-stage schizophrenia and other neuropsychiatric disorders, researchers could provide clinicians with novel opportunities to identify and treat patients before they develop serious mental illness.

Clinical trajectories of people with prodromal symptoms of psychosis 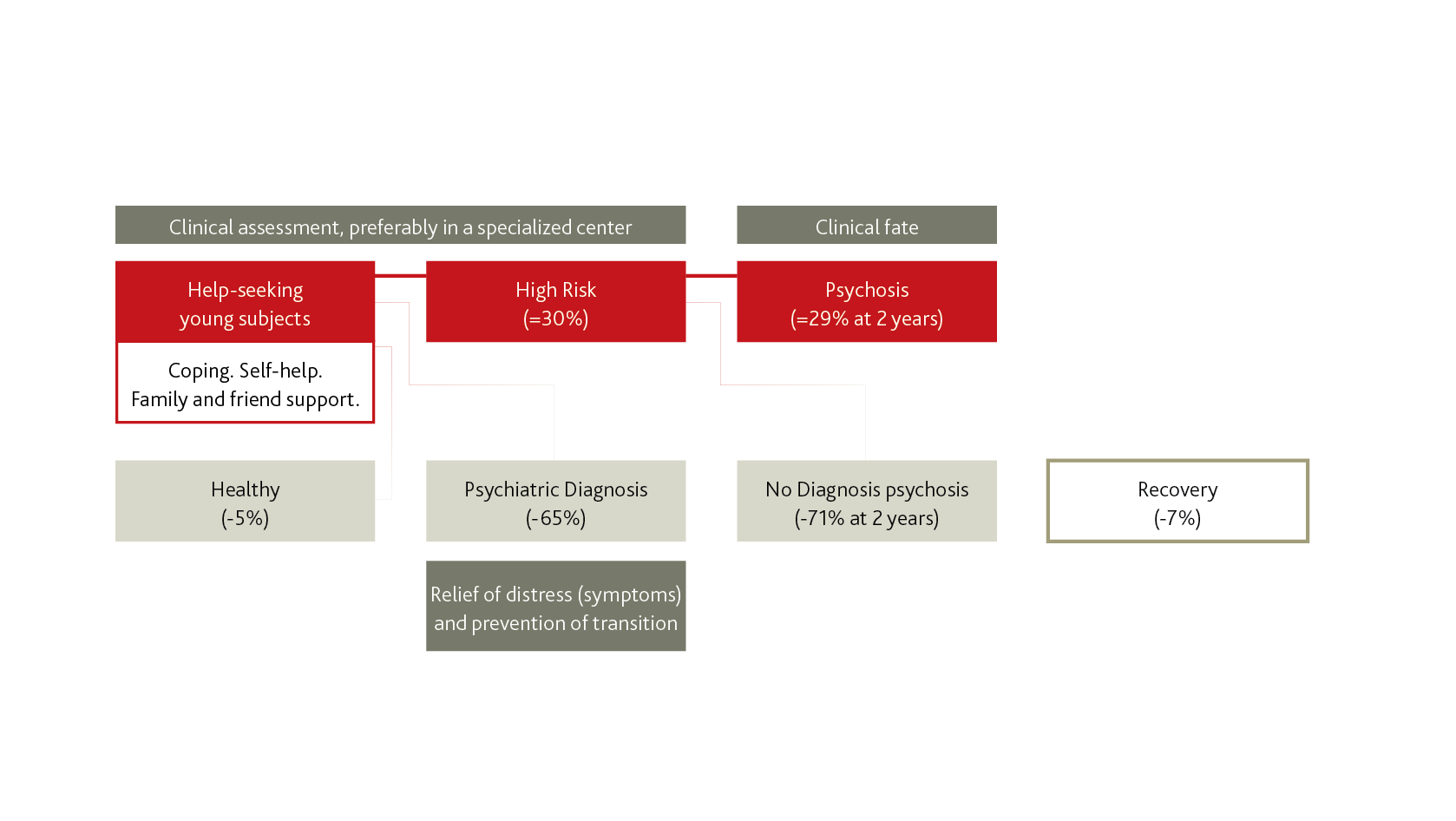 Patients who are recognized early in the disease course have access to a number of evidence-based treatment options.6 In the preclinical phase, patients and their family members may benefit from programs to improve mental health literacy, healthy lifestyle instruction, including avoidance of illicit drugs, as well as evidence based treatments for “comorbid” syndromal psychiatric disorders that are frequently present (e.g., depression, anxiety disorders, etc). For patients who have already shown attenuated (subthreshold) psychotic symptoms, treatment with cognitive-behavioral therapy (CBT) and, possibly, medications may represent the best approach. The challenge has been to identify patients who are at true risk of psychosis while preventing over-diagnosis (false positives). Fortunately, a better understanding of the mechanisms that underpin conversion to psychosis has begun to close the gap.

In order to identify patients with prodromal symptoms who are most likely to experience a psychotic break, researchers have developed a number of screening tools in recent years. These instruments include (among others) the PRIME Screen–Revised, Prodromal Questionnaire–Brief Version (PQ-B), Youth Psychosis At-Risk Questionnaire–Brief, and PROD-screen.7-10 These screening tools have yielded varying levels of sensitivity and specificity in identifying patients who would eventually go on to develop schizophrenia or experience a psychotic break. In other words, it is difficult to predict whether a high-risk patient will later become psychotic on the basis of clinical features alone. Therefore, future screening tools that incorporate predictive markers associated with the disease process—such as neuroimaging, genetic, and peripheral, blood-based biomarkers—could lead to earlier and more accurate diagnosis.11-12 This article explores each of these biomarkers in turn.

Listen to Dr. Correll discuss how the field has evolved over time in defining prodromal symptoms in an effort to identify those who will convert to psychosis and what challenges the field faces in the future

Genetic factors play a large role in the development of schizophrenia, with twin studies illustrating its heritability at 70–80%.13 As one would expect, genomics studies have identified a large number of genetic loci that carry an increased risk for schizophrenia. In the largest and most significant of these studies - a genome-wide association study involving more than 150,000 people - the Schizophrenia Working Group identified 108 loci linked with the diagnosis of schizophrenia.14 According to the authors, people in the top 10% of genetic risk are twenty times more likely to develop schizophrenia than those without these gene variations.

The discovery of specific genetic risk factors for schizophrenia may allow researchers and clinicians to better understand the complex molecular alterations that drive the development of disease. The most important of these genetic variants appears to lie in the major histocompatibility complex (MHC) locus, a structure previously known for its central role in the immune system.15 The MHC locus contains the complement component 4 (C4) gene, which encodes the complement protein C4-A. When overexpressed, C4-A is thought to induce excessive pruning of synapses in the cerebral cortex during adolescence or early adulthood—the time when many people first experience prodromal symptoms of schizophrenia.15 Excessive elimination of synapses and thinning of the cortex may explain the cognitive deficits that are seen in high-risk patients months or years before the first psychotic episode. Therefore, one idea is that extensive synaptic pruning of cortical neurons and other markers of disrupted brain connectivity (already the focus of some neuroimaging studies16-17 could be used to predict the onset of psychosis. If so, clinicians may have an opportunity to intervene prior to the onset of serious illness.Genetic biomarkers, however, have several potential limitations. Most importantly, each of the more than 100 individual loci associated with schizophrenia carries only a very small risk of developing the disorder. The high-risk variants of the C4 gene discussed above, for example, increase a person's risk of developing schizophrenia from baseline levels of 1% to only 1.27%.15 In other words, more than 98% of people carrying the high-risk C4 variant will not develop schizophrenia.

Conversion to psychosis may be better explained by epigenetic factors, or the complex molecular interactions between genome and environment that influence gene expression. In a longitudinal study of DNA methylation in prodromal patients, conversion to psychosis was linked with specific methylation changes that were not seen in non-converters.18 Given that the role of gene–environment interactions in psychiatry is likely highly complex, future studies are needed to identify epigenetic changes relevant to treatment interventions.

Neuroimaging studies of patients with prodromal symptoms of psychosis have shown a strong potential in identifying changes in the brain that occur during the transition to schizophrenia.19-20 Notably, the North American Prodrome Longitudinal Study (NAPLS) has found that high-risk patients who develop full psychotic symptoms lose gray matter volume at steeper rates than those who recover or continue at the same risk level.21 Volume loss among high-risk patients who convert to psychosis is especially pronounced in the prefrontal cortex and hippocampus, which may explain some of the cognitive deficits seen early in the disease course. Other brain changes observed during the prodromal period include loss of volume in the temporal lobe, degeneration of cerebral white matter, increased functional activity during cognitive tasks (likely reflecting a limited “reserve” of cognitive resources), and elevated subcortical release of dopamine, the neurotransmitter most strongly implicated in schizophrenia.22 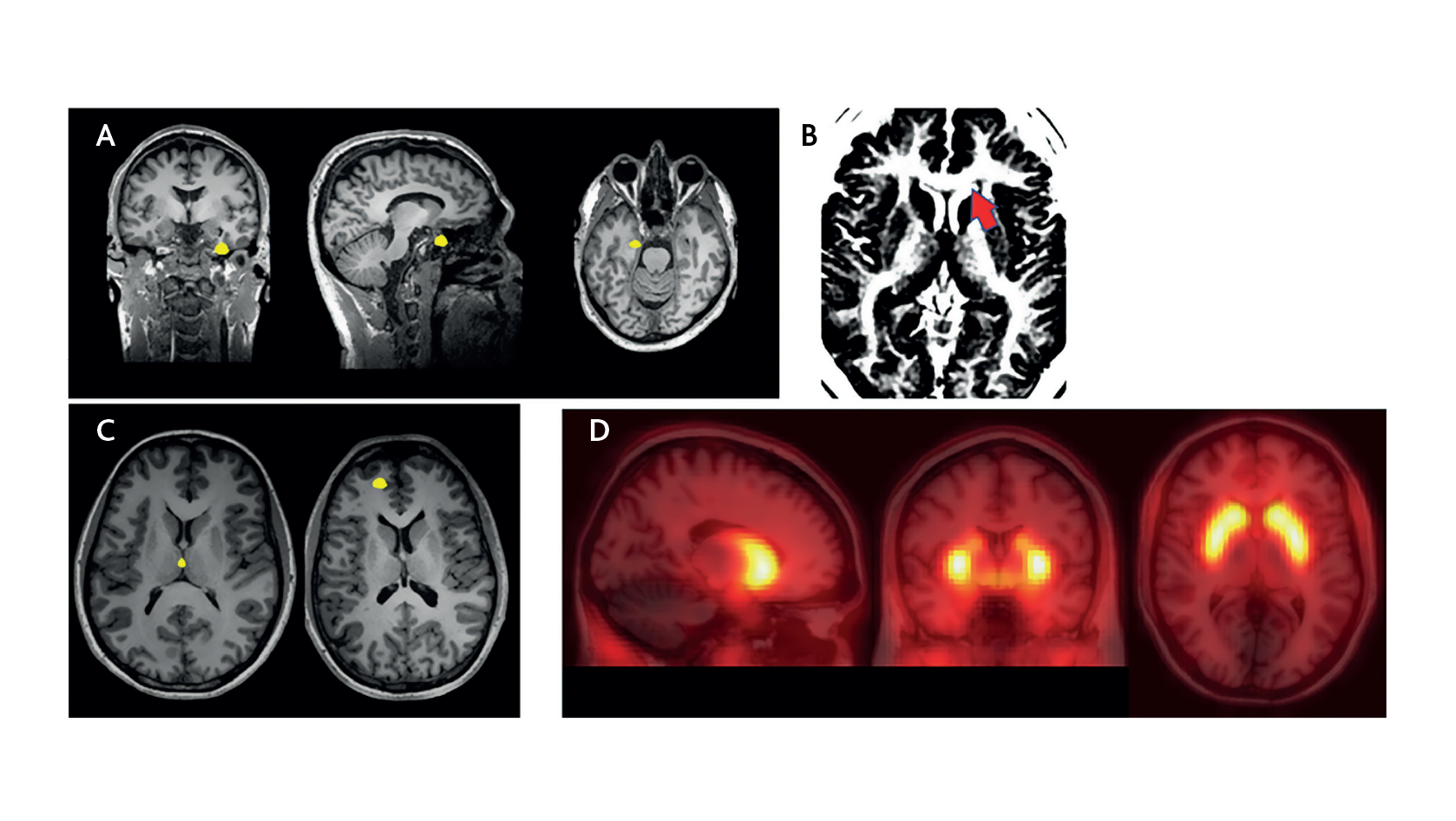 Researchers have found that prodromal patients who develop psychosis show (A) smaller medial temporal volume, (B) reduced white matter integrity in fronto-temporal fibers, (C) increased activation in medial temporal and prefrontal cortex and in the midbrain, and (D) increased dopamine synthesis in the striatum.

Neuroimaging may also be useful in illuminating the molecular mechanisms underlying the onset of psychosis. One process implicated in the pathogenesis of schizophrenia is neuroinflammation and activation of microglia.23 In the same longitudinal imaging study discussed above (NAPLS), gray matter loss in patients who developed a psychotic disorder was linked with elevated levels of pro-inflammatory cytokines, suggesting that biomarkers of inflammation may be predictive of disease progression. Likewise, a PET imaging study using a ligand that binds activated microglia found neuroinflammatory changes in patients at high risk for psychosis.24 Taken together, these studies suggest that multiple neuroimaging biomarkers could potentially be used to detect patients at highest risk of symptomatic progression.

These findings, however, describe average differences between groups, which do not allow clinicians to make inferences about individual patients. In an attempt to overcome this disadvantage, some researchers have turned to machine learning, a type of artificial intelligence that can be used to recognize patterns in neuroimaging data and use the output to predict clinical outcomes.22,25 In one such study, Koutsouleris and colleagues used a machine learning algorithm called support vector machines (SVMs) to recognize patterns of neuroanatomical changes in high-risk participants who did and did not subsequently develop psychosis.26 After learning or “training” on a sample data set, the algorithm successfully predicted which of the patients with prodromal symptoms would transition to full psychosis with a high level of accuracy (82%). Although these findings must be replicated in large-scale longitudinal studies, machine learning provides an important means to identify new imaging-based biomarkers for schizophrenia and other psychotic disorders.

Despite recent advancements in neuroimaging technology, however, researchers have struggled to identify prognostic biomarkers that could be used clinically.27 One barrier to translational research has been the high degree of clinical heterogeneity within the prodromal population.27 Another limitation is that state-of-the-art neuroimaging techniques, such as those used to visualize inflammation, have been used in only a few studies to date.28 In order to overcome these challenges and advance the pace of innovation, some researchers have proposed launching a large-scale research collaboration—similar to the National Institutes of Health Precision Medicine Initiative—focused on discovering new imaging biomarkers across a range of psychiatric disorders.28 Data from large-scale studies of prodromal patients could substantially improve our ability to predict the onset of psychosis.

Perhaps the best biomarkers to screen for mental illness would be detected through a simple blood test.29-30 In one study of people with prodromal symptoms of psychosis, researchers identified a panel of 26 serum proteins involved in various immune, inflammatory, and metabolic pathways capable of predicting disease progression.31 In a cohort consisting of 76 prodromal patients, blood samples predicted development of schizophrenia with a sensitivity of 89%. It has yet to be seen, however, whether these promising results can be generalized to clinical practice. Even so, blood-based bioassays may one day be a useful adjunct to clinicians in predicting true risk for conversion among prodromal patients.

When is Diagnosis Appropriate?

As in most forms of medicine, the golden question in preclinical and prodromal psychiatry is to decide when symptoms (or biomarkers) become a disorder. The terms “disorder” or “disease” have implicit meanings of ill-health, and a preclinical diagnosis may be stigmatizing to patients who are not currently experiencing symptoms that interfere with daily life. Even so, patients would likely benefit from efforts to detect and treat the early stages of neuropsychiatric diseases, including schizophrenia. Moreover, most people at clinical high-risk for psychosis have functional impairment due to the attenuated symptoms and/or co-occurring comorbidities. Further, importantly, some of the neurological damage associated with schizophrenia appears to be irreversible if not treated, resulting in a pattern of clinical deterioration and increasing disability.3 The longer psychotic patients go untreated, moreover, the worse their long-term prognosis. Clinical intervention during the prodromal phase of illness could permit the opportunity to modify the disease course, potentially reducing suffering to patients and families. Part 4 in this four-part series discusses the ethical questions raised by preclinical detection in psychiatry and neurology.

Modern medicine relies on biomarker testing to identify patients at-risk of developing a particular disease and to aid clinical decision-making. Although clinically significant biomarkers for psychiatric disorders have been lacking,32 recent technological advances have led to the discovery of brain changes in high-risk patients that could allow for earlier detection and diagnosis. Given that the development of schizophrenia and other neuropsychiatric disorders results from the complex interplay of genes and environmental factors, future screening tools that integrate a range of biological data may offer the best strategy to identify patients at-risk.11 Advanced screening and early, targeted preventive interventions have the potential to increase or retain functionality and quality of life for patients who suffer from at-risk stages  for severe and debilitating psychiatric disorders and their families while reducing national healthcare expenditures. First, however, our approach to mental health needs a conceptual shift—one that places preventive health at the forefront.

We would like to thank Professor Christoph Correll for sharing his expertise around preclinical and prodromal psychiatry and for providing his feedback in the development of this article. 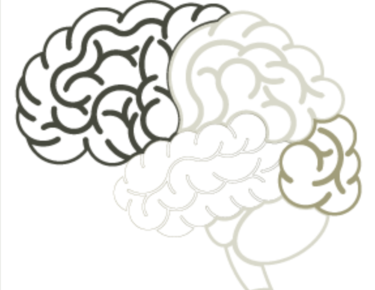 When “Patients” are not “Patients” (Yet), Part 1: Identifying Prodromal and Preclinical Brain Diseases 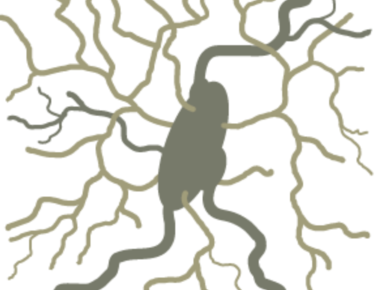 When “Patients” are not “Patients” (Yet), Part 3: The first signs of Alzheimer’s and Parkinson’s diseases 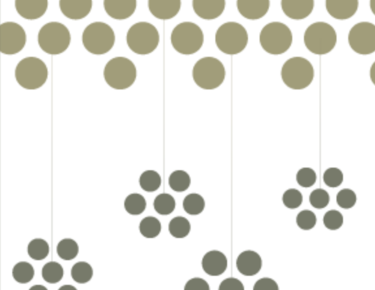 When “Patients” are not “Patients” (Yet), Part 4: The Ethics of Preclinical Diagnosis